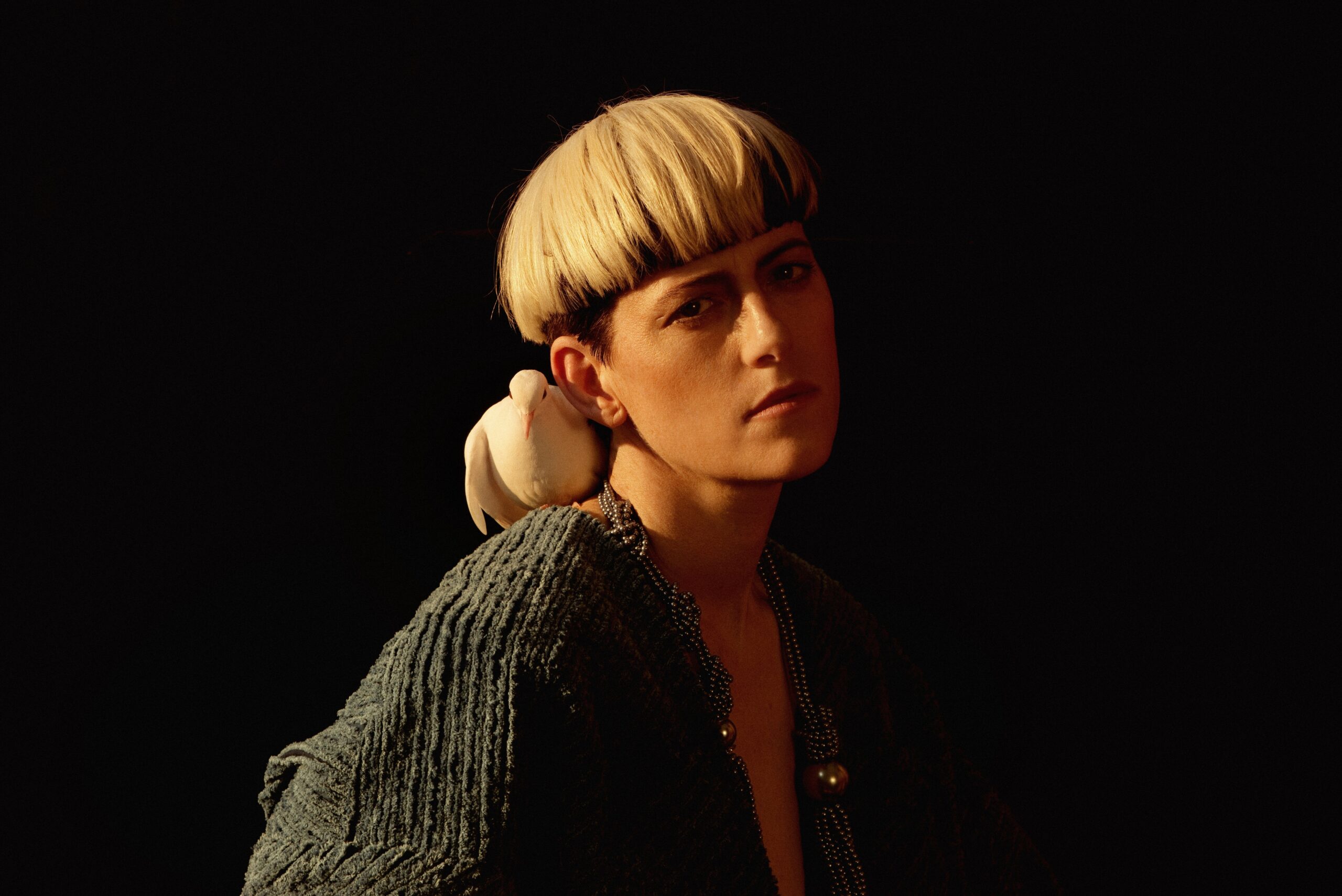 Kat Frankie is a time traveller. Not in a nostalgic, romanticized sense, nor with regard to her sound; her movement between past and present is not an aesthetic thing. It’s more the grandeur of her perspective: Kat Frankie traces the loose ends of history and follows them into the present, uses them to decisively illuminate the political turmoil of our days, understands the connections, the ever-renewing catastrophes – and thus directs her knowing gaze towards the future. What arises from these ruminations, she translates into text and music. Time travel more as poetry, then. Or: a visitation. In this regard, her new album is also the work of an evolved observer, an empathetic thinker, a fierce narrator. But above all: a great songwriter. The 43-year-old seems to look down upon time in her craft, directing her concerned gaze towards human interrelations.

But enough abstraction. First and foremost, Kat Frankie is undeniably a singer. She says so herself: “I was physically built to sing”. And despite the sorrowful, melancholic tone of her music, her singing also contains a sense of well-being, a corporeality. Perhaps a sense of the importance of her own agency as well. In any case, it is an addiction. A way of life. In the nine tracks that feature on Shiny Things, she asks her herself more than ever what change art can bring; a reflection that has led to her printing her lyrics for the first time in her career; lyrics always written in tandem with her music. And more than ever, her words speak to a critical Zeitgeist, questioning the conditions of our existence and own significance to it. The writing process itself revealed a unique relationship between beauty and sadness, between floods of light and darkness – “like walking on broken glass”, she says; the music providing hope, while the lyrics track a mournful gaze. There is no agenda behind it, however; the song itself reveals its needs and possibilities.

Kat Frankie’s songs, which can be perfectly described as defiant pop music, are all elevated by something. This is already discernible in the titular opener, “Shiny Things”, a powerfully-voiced, densely-orchestrated treatise on the inseparable relationship between beauty and decay. Here, the Australian who has lived in Berlin since 2004, reflects light off surfaces already rusting; subtly addressing the in-between moments where past and future converge. The album charges dynamically onwards with the sizzling “Spoiled Children, a denouncement of white privilege that brings to mind early Interpol. The focus on guitar sound is also evident in the “The Sea”, a song-turned-attack on the misanthropic arrogance of political demagogues; here the guitar is reminiscent of the late 90s, its inflection both heavy and supremely subtle. “Be Like Water” then  follows as a concrete plan of action for revolutionary practice, letting the voices of those involved in the mass protests in Hong Kong in 2019/2020 ring out. The dramaturgical evolution of Kat Frankie’s songwriting is also tangible in “Riverside”, a song driven by a tremendous groove that swings up to envelop you, caress your ears (the soul!) tenderly and gently and with unspeakable intensity. The music relaxes somewhat with the questioning “Natural Resources”, only to emphatically condemn the exploitation of bodies and resources under capitalism; these things seen as only holding worth if they bring in money. With “Wrong”, Kat Frankie’s enthusiasm for Radiohead’s 1995 album “The Bends” becomes apparent, the multi-instrumentalist light-footedly dancing through a dense compositional work reminiscent of the Brits’ furtive magnum opus. In light of the intensity that brews amidst all this, “Love”, sung as a ballad-like duet with Fama M’Boup, provides a not-inconsiderable sense of consolation (in two respects: for the album and quite existentially), in that it knows we do not have to go through it alone. The album ends with “Road Movie”, bringing us back from dream to reality like a spaceship gently touching down again… but then perhaps not: “The dream makes the dreamer, the vision the king / The structure of things undone / Stare at the ceiling, sit on the bed / Waiting for sleep to come“. With these parting words from her best album to date, Kat Frankie leaves us longing to remain in the state of the past 34 minutes. The solution? Press repeat!

If “Shiny Things” could speak for itself, it might say: I am music; I am the dance that the ghosts of the past perform amongst us, invisible and yet here. I am the sound of nostalgia yearning for a better future, the realisation of which the past has already destroyed. I am the visitation of the present; I am both grief and hope. In this way, the nine tracks that make up Kat Frankie’s “Shiny Things” can be seen as protest music, albeit of the melancholic kind; one where an overlooked realm of revolt is put into play; a polyphonic, understatedly-orchestrated mourning for something that cannot be and yet exists in this embrace of phantom pain, perhaps revealing itself only in song. And there they are again: the ghosts of revolutions rising up through this album, inescapable. Kat Frankie has dedicated these songs to them. They are full of beauty and dignity.