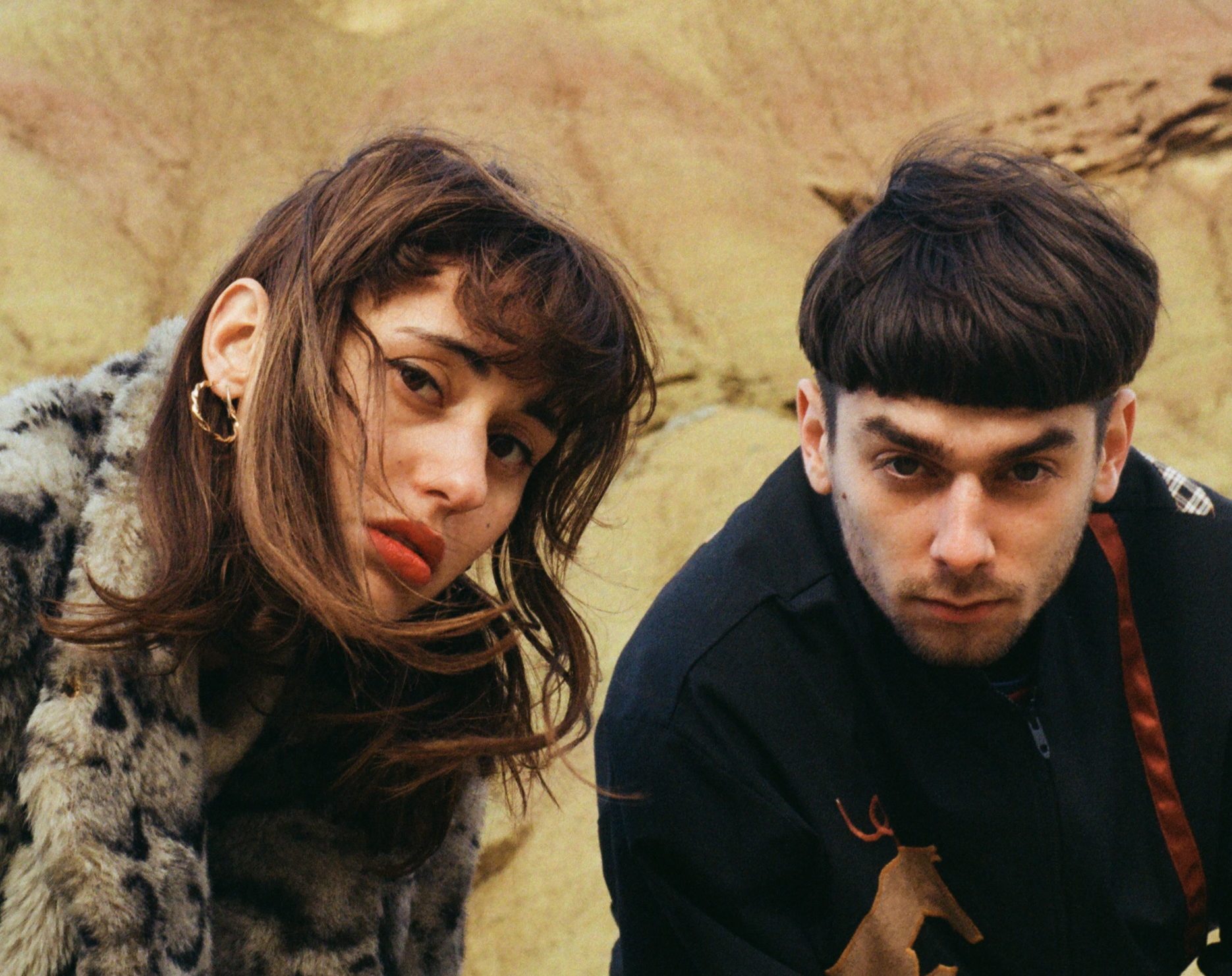 For starters, they have this weird name: Agar Agar. Agar-agar is a jelly-like dietary product made from boiled algae. As it happens, Armand used to raise ants, feeding them with an agar-agar mix, and has always found it to be an intriguing word. One can imagine all kinds of definitions for agar-agar. As a name, it can conjure up images of anything, from a ridiculous Whole Foods product to a Norwegian black metal band. It reflects what makes the pair so special: ever evolving, a little absurd and always free, with a slightly punk, carefree attitude. Above all, Agar Agar is one of the greatest surprises to come out of France in recent years: a group that no one really saw coming that has succeeded in pulling the perfect heist, with almost no publicity or help from showbiz.

Armand (26 years old, synth and drum machines) and Clara (25 years old, vocals and drum machines), both attended the École de Beaux-Arts de Cergy – a fine arts school near Paris – which is where they met and fell in love with trance music. Armand is more of a synth-fan, and swears by the techno of the famous Warp Records, as well as slightly crazy futuristic concepts. Clara has a background as a garage rock singer with a smoldering style in the band Cannery Terror. One evening, Armand and Clara decided to start jamming out together, thus giving birth to Agar Agar. After a few DIY shows at schools during arty soirées, Cracki Records came across the duet and immediately signed them. Not long after, in 2016, they released their debut EP ‘Cardan’, serving as Clara’s introduction to the world in her role as a Goth priestess, a sort of reincarnation of Siouxsie Sioux playing Donna Summer. The EP has the ring of a shamanic acid trip – distorted, sweaty, and ultra-slow – invoking spirits and casting spells. In two years, armed only with this four-track EP, Agar Agar has succeeded in filling venues such as La Gaîté Lyrique and La Cigale in Paris, which sold out months in advance, and they are now a staple name in their genre. Maintaining their momentum on their way to conquer the universe, they have met with the same success from Paris to Montreal, Berlin and New York.

They are now ready for their first long-format release, ‘The Dog and The Future’, with cover art by artist Keith Rankin. They wrote the album in a country house near Biarritz, the perfect environment for focusing, far away from marathon concert tours. While there, they spent each day living and brewing in creativity together, with ideas popping up from all directions upon which they would act immediately, in perfect harmony. Recorded using their signature set-up – a Yamaha TX 81Z synth, effect pedals, a Korg MS-20, and a TR-606 drum machine – ‘The Dog & The Future’ was designed sort of in the same way as a concept album. The first part – ‘The Dog’ – was created for the stage, while the second part – ‘The Future’ – is more metaphysical and where the real risk-taking is to be found. The album is trademark Agar

Agar: Clara’s spellbinding voice layered over perfect, sultry, slow disco instrumentals. A melancholy, nostalgic, poppy, and futuristic album with themes relating to virtual reality, simulated life, love, and dogs. By the group’s own admission, they wanted to go beyond the new disco, FM sound of their beginnings and move towards the dark side. The album is full of gems like ‘Shivers’, an ambitious track where Clara totally lets go and reveals herself as a charismatic pop singer. Her voice is noticeably more assertive and breathes a new freedom as she lets her hair down, telling a story of virtual reality and a pixelated present. It’s worth noting Clara and Armand have another shared passion: The Sims, a computer game they have been known to play for up to five hours a day, to the point where it sometimes alters their perception of reality. It’s that state of semi-consciousness, between two worlds, that inspired them to write the track ‘Shivers’: the story of a Sim who realizes that he’s a Sim…

A little further on is single ‘Fangs Out’, whose ultra-sombre music video (directed by William Laboury) alternates between cheap 3D graphics and real-life shots for a result resembling an episode of Black Mirror on codeine. The track is filled with stifled rage over a futuristic beat, which already promises to be a crowd- pleaser on their upcoming tour. ‘Sorry About The Carpet’ is inspired by the slacker universe of underground comic artist Simon Hanselmann. It evokes themes such as doing drugs with friends, paranoia, and moments of subjective grace. The video was directed by Antonin Peretjatko, farcical director of the films ‘La Fille du 14 Juillet’ and ‘Struggle for Life’. On the album, Agar Agar goes out on a limb with ‘Gigi Song’, a grandiose pop song in the grand tradition of power ballads à la Bon Jovi or ‘Take My Breath Away’ by the band Berlin. It’s a melodramatic song about a transsexual woman who finds a fetus in a letterbox. An ode to love that makes for a track both gentle and beautiful, full of kisses, caresses, and sweet words for children.

And yes, you will be met with Agar Agar’s usual absurdity, ennui, and naive adolescent poetics on ‘The Dog & The Future’, which is full of nods to pop culture, labyrinthine enigmas, opioid-induced ambiances, and much, much more. To discern them, you’ll have to dig deep into the album, whose release promises to make a lot of noise this fall. An album that goes back and forth between a saccharine-sweet heart, a shadowy sky, steam rising from the earth, mystic epilepsy, and the nihilistic black leather of the new ‘blank generation’.