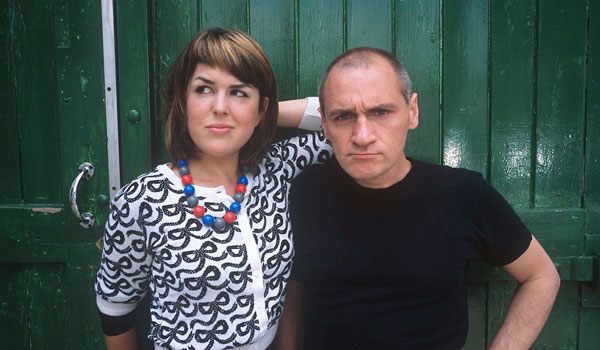 is the noise you hear when you fill a thin plastic bag with ice cubes , swing it from the ceiling by a thread against a large cardboard box until it rips , than sample that mess and use it as a starting point for a song.

A long story to a short name, however, its onomatopoeic origin does not do justice to the music of this London based duo, who have written an album that skips through the street in the rain, kicking puddles with out a care.
Carim Classman and Galia Durant are Psapp. Two friends who spent time in a dirty kitchen enjoying food fights, dressing up, playing with cats and violins and recording it all, waiting to see where the late night fun would take them next. Tiger, My Friend is where all their playful antics led them, a warm intricate record that wears it heart fully on its sleeve.
In a time where artists such as The Notwist and The Postal Service use intricate electronics as a means to maudlin ends, Psapp use it to accompany more traditional song writing that is infectious and quirky as it is dreamy. The pair use a host of toys, broken keyboards, plucked violins and gentle glockenspiels, however, unlike the glitchy and broken offerings of fellow North London resident Kieran Hebden, they are sequenced perfectly below more organic song writing, that is delivered in odd meters with impressive dexterity.
From the wistful guitar and click clack beat of Curuncula to the more stern moments such as the whooshing and glacial Calm Down the album has great range, however, it’s the heartbreakingly honest songs like The Counter where the vulnerability of the music bobs to the surface. Where the velocity of the programming becomes restrained, allowing the coquettish vocals of Durant to glide beautiful above a sombre and careful piano piece. Psapp´s lovelorn tunes tell tales of everyday insecurities with a refreshing honesty, the simple sentiments of which, through the music become more than the sum of their parts.
A contrary pair, Carim is a talented producer and sound engineer with impeccable judgement while Galia is a chanteuse with a charming waywardness, their differences are perfectly highlighted when asked to describe their sound. Carim, prefers to be succinct, describing it simply as “songs gone wrong” whereas Galia prefers to be a little more romantic “it’s a mixture of heartfelt pop and downright childishness with some noises that poke their heads out and occasionally, to have a sniff around”.
It is these differences that make Psapp such a loveable and unique pair. Tiger, My Friend demands that love. If you put it on in the background – it will stomp it’s foot and pull faces until you turn around and join in. In a nutshell its effect is such that you cannot help but smile at its playfulness. Food fights and dressing up has never sounded so appealing!