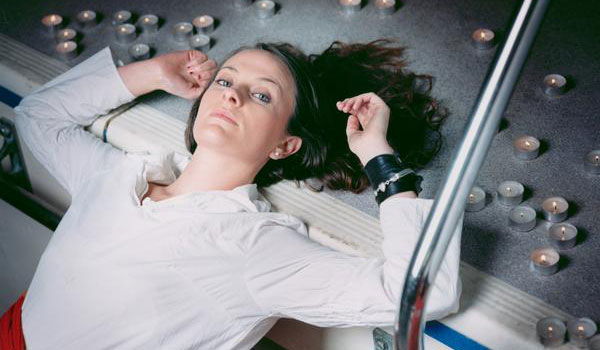 Although she laughs as she says it, Petra Jean Phillipson isn’t joking when she says she “wants to pull people all over the place emotionally” with her music. Listening to ‘Notes On Love’, this 32-year-old singer-songwriter’s exceptional debut album, you can see what she means. Records this honest and affecting are rare, but records which ensnare you from the start and leave you craving more, as this one does, are rarer still. Make no mistake; ‘Notes On Love’ is a dark and bewitching album from a major new talent set for great things.

Petra is the first to admit it’s a “heavy” record, not just because of its intimate, defiant tone and deeply personal lyrics, but because she’s had plenty of experiences to draw from. Music was her first love and at 8 she formed a band at school in Ashford, Kent. Over the years she’s honed her craft in countless combos across the country, providing vocals for like-minded musicians such as Martina Topley-Bird, The Beta Band, Mad Professor, David Holmes, Marc Almond, Grand Drive and assorted hip hop acts in New York and London. “I’ve always been around really interesting people who are good at what they do.”

Writing constantly and determined to one day carve a solo career, Petra has built up a stunning body of songs which form ‘Notes On Love’. Recorded at the end of last year in London’s Mayfair Studios with her pal Si Tong, once guitarist in The Verve, the album closes an eventful chapter in Petra’s life. “When I started writing this record eight years ago, the same time I moved to London, it was just voice and guitar with another guitar… and that was it”.

If her soul-rich purr sounds familiar (there are shades of Billie Holiday) that’s because three years ago she found a kind of fame fronting The Free Association, that psychedelic punk-funk ensemble helmed by her producer friend, David Holmes, who lately scored Ocean’s Twelve. She met him through Martina Topley-Bird, a close friend who lived round the corner from her London home. One day he phoned her to ask if she fancied recording some vocals in LA with him. She went for a week and ended up staying three months.

The Free Association didn’t sell stacks of records but the group promoted the LP heavily on TV and the road. Petra appeared on Later… With Jools Holland and played Glastonbury and football stadia in Europe. As much as she enjoyed the attention, after a while it sent her loopy. “You’re in this bubble, getting driven everywhere and you’re not treated like a human being because people think you’re a pop star. Your family goes weird, your friends go weird, they fall out with you. Everyone goes weird.” In-between touring and still suffering the effects, Petra retreated to a studio in Devon with producers Rob Ellis and Head to record a version of her album, however, she wasn’t happy with the results and the sessions were aborted.

Ellis, of course, came to prominence as the producer of Polly Harvey’s debut, ‘Dry’, a record that some might propose shares certain qualities with ‘Notes On Love’: a raw, bluesy, confrontational approach to song writing, for one. “The most important thing I learnt at the time was that no one gave P J Harvey that sound apart from Polly. It taught me that I needed to play more of the instruments myself. It was the only way I was to find my authentic sound and Si really helped me do that. ”

In her childhood Petra lived for a spell in Australia, on returning to Ashford, she found she didn’t fit in with the kids she’d grown up with. As a teenager into hip hop – KRS-1 was a favourite – she’d nip up to London to check out what was going on in the clubs and who was wearing what, then catch the milk train home. “I think music really saved me in my teens. It takes you out of yourself, it’s a great distraction.” Mainly, like most inquisitive teens, she just wanted to escape her hometown. She took a year’s art foundation course at St. Martin’s but loathed her pretentious peers, then enrolled in an art degree in Bath where she produced installations. Today she works as a conservator at St. Paul’s Cathederal.

While in Bath she ran a hip hop night called The Swamp where she would play a difficult mix of music, from Hazel O’Connor and the Beastie Boys to Blondie and The Specials, then going back to America for a Horse with No Name. She then learnt her trade in “all girl punk funk line ups” attracting interest from Fierce Panda, nailing vocals in one take and perfecting her guitar playing while travelling across the globe.

Falling particularly in love with New York, she tried to move there in order to make a record with the credible indie label Mush records, however, it wasn’t to be and her adventures across the Atlantic only fuelled her desire to write her own material. Once, on her 23rd birthday, she asked a stranger for directions to a restaurant for a celebratory meal. That person turned out to be that quintessential Englishman, Quentin Crisp, whom she adored. Five years on in the same city, she decided to ring him up and take him to lunch, as was customary for Crisp aficionados during his penurious twilight years.

“I got his number from the phone book. Hello my name’s Petra, would you like to have lunch? And he’s like, ‘Oh my dear darling!’ and then gave me the diner address and said, ‘I’ll be on parade like a Dutch prostitute!’ He goes to the same place every day and you just pay for his lunch, very cheap. He was really humble and lovely.”

Ask Petra why she thinks other artists like working with her, she says: “Because I just get really excited and enthusiastic. I like work, I love music and film, all those things, I really love them. And I love making things and I’m a bit crazy. I have to keep doing things otherwise I go totally mad, which means a lot gets made.”

Now, with ‘Notes On Love’, a record that easily eclipses all she’s done before, Petra can finally enjoy success on her own terms.