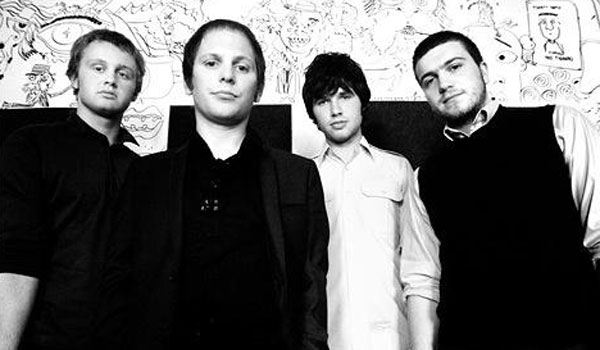 Harrisons’ dashing debut proves there’s more to them than a postcode shared with the Arctic Monkeys.

“No Fighting In The War Room” is the debut album from hotly tipped Sheffield four-piece Harrisons. Fans of earthy lyrics, northern accents, hard guitars and good old fashioned rock ‘n’ roll read on, but don’t be too quick to pigeonhole – Harrisons may hail from the same fertile scene that spawned the ubiquitous Arctic Monkeys, but this debut album is in a class of its own.

“We feel we have made an album of diversity,” say the band. “It sounds like everything we wanted and more. It has the slower numbers, it has the faster numbers, the upbeat and downbeat numbers. The production is perfect to our initial vision and we couldn’t be happier.”

Recorded in five weeks at Lincolnshire’s Chapel Studios with producer Hugh Jones, the album is a tour de force of British guitar music, recalling the slice-of-life lyrics of The Jam, the intensity of The Clash and the attitude of The Verve. Clearly, producer Jones, whose prior credits include Echo And The Bunnymen, The Teardrop Explodes and The Stranglers, was the perfect man for the job.

“The endless list of high quality bands that he produced left his ability in no question and working with him bore fruits almost instantly,” say the band. “We all learned a great deal from just observing him work and he has the most fascinating rock and roll stories any young music geek could wish for.”

The outcome is an album of contrasts, ringing with northern charm, blue-collar social commentary and a wealth of musical styles. Former single Monday’s Arms is vitriolic disco, Take It To The Mattress has a dangerously infectious riff and Blue Note is a terrace anthem in the making. Elsewhere, Man Of The Hour is a taut exercise in post-punk, Listen is the album’s lighters-aloft moment and Come For Me brings things to a dramatic, fist-clenching close.

With No Fighting In The War Room, Harrisons have delivered an album that’s worthy of the weight of expectation heaped on them by fans and the press. The band – comprising vocalist Adam Taylor, guitarist Ben Stanton, drummer Mark White and bass guitarist Ashley Birch – formed two years ago in Hillsborough, Sheffield before the term ‘New Yorkshire’ had even been dreamed of.

Naming themselves after Harrison Road, a local street whose sign they eventually procured and used as a stage prop, they soon made a splash on the emerging local scene. Things moved quickly after that, with the band gigging around the country (and being the support band of choice for The Twang and The Enemy), picking up high profile fans (Steve Lamacq, Phill Jupitus), storming South By Southwest (“we just got bollocksed for five days and ran amock”) and recreating the football scene from Kes for the Blue Note video, roping in Phoenix Nights star Steve Edge as the PE teacher and winning the approval of Kes director Ken Loach in the process.