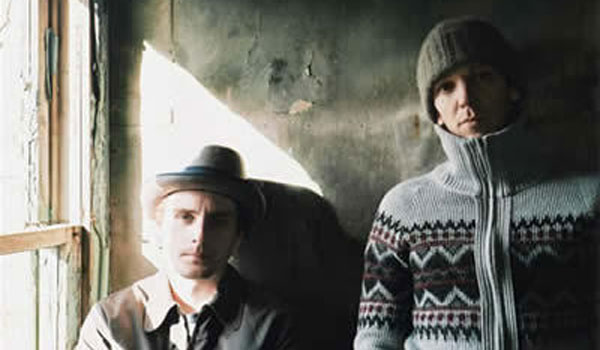 Comparisons with Syd Barrett, early Bjork or Devendra Banhart barely do IODINE justice: a thing of wild and magical beauty.

Ignore what you hear, pop music’s great at the moment. Especially when it’s done in the beautiful but slightly unkempt style of Half Cousin.

Half Cousin is a collective revolving around main songwriter/singer Kevin Cormack. The ethos behind the music of Half Cousin is “short, melodic songs made from junk!”. It’s perfect pop, but rather the pop of Tom Waits or Arab Strap. Not trying too hard. Music made with accordions, clarinet and wooden blocks all tripping over each other. But like all great music it just doesn’t need to try, it just is.

Half Cousin are a metaphysical revolution playing junked-up pastoral music for the psychiatric set. Which is a good thing – trust us.

The founding members of the band met at school in the Orkneys, Scotland where much of their subject matter comes from. Listening to their music its difficult not to conjure up your own images of the place, as the majority of the songs are inspired by life on the islands. For instance, the latest single ‘Country Cassette’ was inspired by Kevin’s Uncle who booked Country and Western bands for the Pubs and Clubs of Orkney. ‘I used to work at a petrol station with him and we’d drive to work on freezing cold, snowy winter mornings listening to his Country cassettes on his car stereo.’

Part of the joy of listening to Half Cousin comes from hearing the joins and spotting the cracks. There are electronic squawks, asthmatic accordion, finger picked acoustic guitar, shambolic junk percussion and otherworldly vocals from Cormack. So Lo-Fi then? Definitey not, but there aren’t many more natural or organic sounding groups around, as you’ll no doubt hear as soon as the off-beats and acoustic strumming of the debut single Half Turn make their presence known.

Now based in London after landing a record deal (with Gronland – home of NEU!), the Half Cousin collective has grown in numbers and stature. With fellow Orcadian Jimmy Hogarth they recruited two members of the late great Joe Strummer’s band the Mescaleros. A couple of low key dates in the capital pre-empted the band packing their suitcases and heading over to Texas, for an appearance at this year’s South By South West that, thanks to a jam-packed audience, did wonders for Celtic-American relations.

The band has just released their debut album, “The Function Room”. In explaining the title Kevin hits upon the underlying theme of the Half Cousin ideal: ‘I like listening to musicians who challenge the functions of specific instruments, or try to make other objects into musical instruments… Those are the kind of people I’d like to have in the Function Room, with my ear to the door’. With “The Function Room” the Half Cousin family looks set to grow and grow. ‘Come across them along some byway at Glastonbury you might even care to join in’ (The Times).

CRAIG McLEAN ON POP – From The Scotsman

Kevin Cormack isn’t entirely sure how he came to be signing a record contract at London Zoo on Wednesday. It – the zoo, not the contract – was the Germans’ idea, he insists. “Maybe they were trying to make me feel at home and wanted to put me in the seal enclosure!”

Cormack is from Kirkwall in the Orkneys. He’s the singer-songwriter behind Half Cousin; this week, he and his schoolfriend Jimmy Hogarth released their first single, Half Turn/Mrs Pilling. “The Germans” are the people behind a label called Gronland. It has offices in London and Berlin, and is best known for reissuing the Neu! catalogue a few years ago. As a long-time fan of Kraftwerk and Can, Cormack felt these were people he could trust. At the age of 29, he’d put in the hours and the years in the run-up to his first album. He couldn’t just throw it away on any old Tom, Dick or record company Herbert.

But first things first. Half Turn/Mrs Pilling is released on For Us, a totty imprint of the reinvigorated Rough Trade. In its short life the smaller label has established itself as the tasteful boutique that brings you debut releases by interesting new bands in a limited edition style (see: the Hokum Clones, the Earlies, Adem).

Half Cousin’s thing, says Cormack, is pretty straightforward: “short, melodic songs made from junk”. In the case of Half Turn, this means wheezing, breezy folk music. It’s a neat little pop song, with part of the joy coming from hearing the joins and spotting the cracks. There are electronic squawks and emphysemic accordion, shambling acoustic guitar and high, otherworldly vocals from Cormack. Ivor The Engine, seemingly, is on percussion.

“The song’s about a character who runs away and what’s changed about him when he’s found again,” says Cormack. “I make stories into the songs, but if you read the words they’re not exactly linear, they’re fragmented.”

Mrs Pilling makes more sense, mainly because its words were written by someone else. Spoken by Cormack in his soft, curly Orcadian accent and set over randomly-strummed guitar and can-barely-be-bothered woodwind, they’re taken from Faces In The Water, a novel by New Zealand writer Janet Frame (author of An Angel At My Table).

It’s a wonderful single, magical, understated and somehow elegantly chaotic. Even the sleeve is spot-on: a collage constructed of cassette tape, felt pen and an image of a woman’s face, all put together by Cormack, a painting graduate of Duncan of Jordanstone art college in Dundee.

Cormack’s musical roots lie in the folk scene in Orkney. After graduating from college, Cormack moved back to the islands. Alongside stints in traditional bands, he wrote his own songs and experimented with four-track recordings.

Cormack hooked up with Hogarth, who was by this time running a recording studio in Kilburn, London. Most of this year has been spent recording their debut album, due for release in March; the same month, Half Cousin play at Texas’s influential music showcase South By Southwest. Before that there’s a
second single, Country Cassette. “It’s inspired by my uncle, who books Irish country bands in Orkney. I used to work with him in a petrol station and we would drive there on cold, snowy mornings listening to tapes of all these bands.”

Half Cousin are not alone in their desire to “take the folk thing and do something subversive with it”. Fife’s Fence Collective have given us the odd Syd Barrett-type musings of Lone Pigeon, Pip Dylan and King Creosote, while their compadre James Yorkston has released an EP featuring traditional Scots tunes. Hopes are high that next year’s Beta Band album will also evince a return to the dazzlingly eclectic, beat-spewing folk’n’roll of pre-Hot Shots II material.

Kevin Cormack doesn’t claim to be an anti-alchemist, conjuring base music from technological gold. “Nah, that’s Jimmy’s job. I’m quite proud of being crap. We’re trying to customise things – make music from metal boxes and coathangers and bins and wooden spoons.”

After some rumination, he decides that what Half Cousin are about is “provid[ing] a home for orphaned instruments. We had this idea of doing a fantasy band. In the way that Belle & Sebastian sometimes sound like a weird school band. I like the idea that it feels amateur, like it’s about to fall apart at any minute.”

provokes comparisons with Art Garfunkel, Led Zeppelin and Ivor Cuttler all at once.