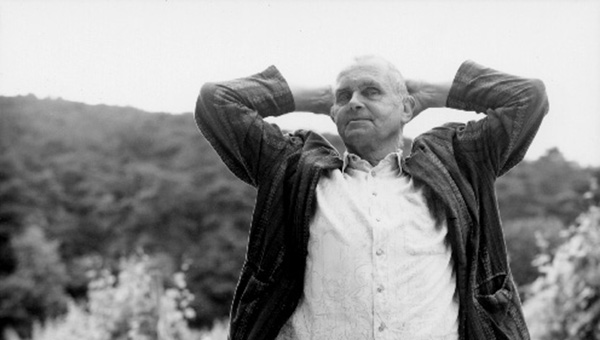 Grönland Records is proud to announce the Works 1968 – 2005; a comprehensive collection providing both a ‘best of’ and a fantastic entry point to the pioneering and inspirational musical life of Hans Joachim Roedelius For the first time ever a double CD release featuring music from a multitude of projects and spanning a period of five decades!

If you’re a fan of contemporary electronica, but if Roedelius is an unfamiliar name to you, then you’re missing out on one of that genre’s most important well-springs

From being a founding member of Kluster in 1969 who’s eponymous debut pioneered the brick-a-brack approach to electronic music and is still revered today. To working with a long list of impressive collaborators such as Holger Czukay (Can), Conrad Plank (Krautrock producer extraordinaire) and forming Cluster by adding luminaries such as Brian Eno and Michael Rother (NEU!) to the ranks.

However, that is only half the story of a extra ordinary life which has seen him endure the twin trials of a prodigious childhood and enforced membership to the Hitler Youth (‘Hitler went crazy. He wanted us all to be child soldiers in the Hitlerjugend and go off to fight the Russians.’) to being imprisoned and then later to occupy a multitude of roles in life.

An inspiration to artists as diverse as Red Hot Chili Peppers, Brian Eno and Julian Cope. Roedelius has persued his unique and extraordinarily beautiful vision for half century. He has also lived a life that screams out to be told in a movie…

Roedelius’ first prodigious steps into creative life began in his childhood, when he found himself thrust into roles as a child actor in six German feature films before the age of ten. The War and its aftermath then presented particularly difficult times to Roedelius’ life, with his family forced to evacuate toward the Russian border in 1943. The post-war atmosphere became less friendly still with a sinister new civil police known as The Stasi marshalling the then shaping East Germany. Uncomfortable and incongruent Roedelius fled this regime, selling fake jewellery and living in a single apartment with refugees for company. Only to be arrested and interrogated as he attempted to cross the border to visit family in 1952.

Given time and freedom, Roedelius found himself in the creative outskirts of the different new society in which he was now immersed. Eventually in the 1960s, following hippy expeditions (at one time he was masseuse to the President of the French Republic. “I used to go in and out of the Elysée Palace barefoot – it was part of my “Hippie Healer” outfit, along with the long hair and sheepskin jacket.”) and various dabblings in almost-jazz, Roedelius set out as a professional composer, indulging in experiments with sound that he described as ‘anarchic musical actionism’.

This year Roedelius will be 72. While most of his Krautrock peers hung up their creative hats years ago, he has continued to develop and experiment with the abandon of a teenager

Hans Joachim Roedelius overall impact on many musical genre is immense and he has oft been credited as one of the ubermeiesters of what became known, affectionately, as Krautrock. He has released over 100 records, encompassing experimental and leftfield departures to more traditional soundtracks and classical compositions and has a loyal fan base of young and old.

For the latter this release will provide a perfect summation of an eclectic and experimental artist that has continued to inspire and influence artists all over the world. For the former or those not familiar with his music or life listening to the Works 1968 – 2005 project will be like discovering a hidden chest of music that will be long treasured.