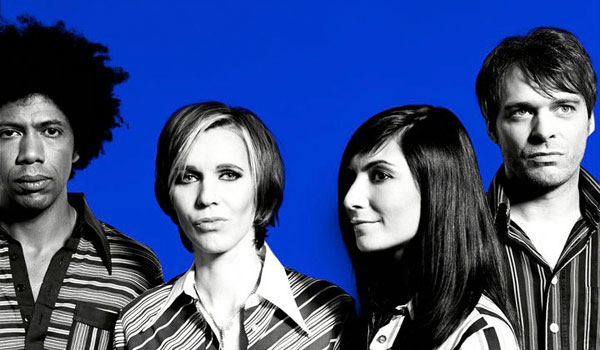 PET are really rather fabulous and could well be the next band that are a little too odd to have any right to cross over to the mainstream (see also the Scissor Sisters).

Having picked up numerous plaudits for their debut album, 2004’s ‘Player One Ready’ (which included John Peel’s and the Xfm favourite ‘No Yes No’), PET are swinging back into town with their second LP – the curiously titled ‘Rewind The Sofa Lady’. Recorded in Berlin and partly mixed and co-produced by Gareth Parton, whose talents have recently propelled the similarly eclectic Go! Team into the mainstream.

PET are lots and lots of fun

PET’s Berlin contingent are Andre Abshagen and Miss Mono. Andre, PET’s founding member, built his first electric guitar out of cardboard at the age of eight, then formed his first band when he was fourteen. He’s currently building his own synthesizer, based on a Commadore 64 chip. Miss Mono, who also works as a TV journalist in Berlin, first moved to the city for study, then found that she didn’t want to leave. In the years between uni and PET she found herself starring in (and composing music for) cult German horror movies. As one does.

Over in Milan, the other half of PET are Dodo NKishi (also resident sticksman in Mouse On Mars) and Stefania Vacca. Growing up in Sardinia, Stefania was a choirgirl with a strong connection with nature. During her teenage years she fell in with groups of musicians, artists and political activists and her passion for music – punk, reggae and rock – blossomed. She met drummer Dodo in London, who drew out her talents, making music a priority as well as a profession. These four disparate spirits came to be entwined over a long period.

Fresh, grown up pop with a twist… a sparkling electronic jewel.

It all began when Andre was in his former band, the experimental German act Dauerfisch, looking for new challenges outside of electronica. As is often the way with these things, it wasn’t long before the side-project became the main focus of Andre’s creativity, and he spent the following two years developing the sound of PET. On early recordings, Andre had done everything in earshot: the songwriting and production, all the programming, all the instruments; but as ‘Player One Ready’ took shape he called in favours from friends and friends of friends, and saw PET’s ranks swelling to a full-blown four-piece. Raving about that first album, PlayLouder noted that it sounded rather like “what somebody from the 70s who’d been to the 80s thought the 21st century would sound like”.

Pop of the future

Working from two different cities might prove challenging for many bands, but for PET the situation fuels a brilliantly diverse creative atmosphere. For ‘Rewind The Sofa Lady’, ideas were sent backwards and forwards for months. The new album was finally recorded in just two weeks. Along with the band’s varied sonic motifs, from night-time club tracks to drivetime anthems, Andre’s novel lyrical touches provide further evidence for PET’s commitment to being anything but ordinary. With Andre’s original vision for the group refined to such a degree – PET, once a studio-based one man band, now also have a potent and explosive live show to their name. With the shades on, the windows down and the stereo blaring PET are hitting the road in order to bring sonic pop to your ears this Summer.

Abshagen is very much in thrall to Atari bleeps and Seventies glam, and such Player One Ready is his nostalgic, soft focus trip.