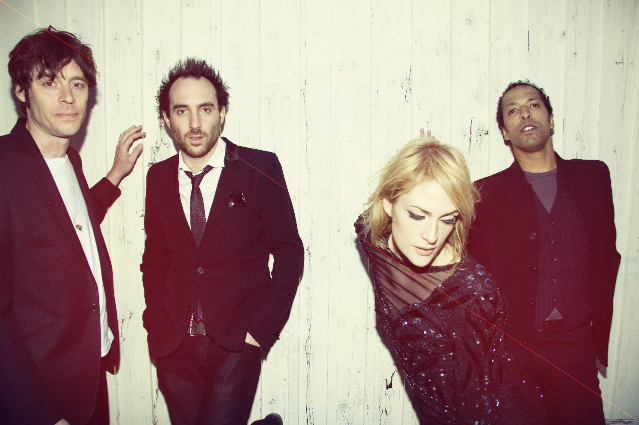 Fiery foursome Metric is hard at work this Spring and Summer. After a relentlessly busy two years, supporting 2005’s critically-acclaimed LIVE IT OUT – which took the band everywhere from an opening spot for the Rolling Stones’ dates at NYC’s Madison Square Garden, to the stage of 2006’s Coachella Festival, to Canada’s Juno Awards and across Europe, the states and the UK for multiple sold-out tours – the band has finally had some down time to start thinking about their much-anticipated fourth album. In the meantime, frontwoman Emily Haines, who released her debut solo record, KNIVES DON’T HAVE YOUR BACK last September, will release a follow-up EP, entitled WHAT IS FREE TO A GOOD HOME? Finally this summer, after countless requests from fans, Last Gang Records will officially release Metric’s first album, GROW UP AND BLOW AWAY, which was recorded in 1999, but never released.

Currently, the members of Metric – Haines, guitarist Jimmy Shaw, bassist Joshua Winstead and drummer Joules Scott-Key are in pre-production at Giant Studios (co-owned by Jimmy Shaw and Death From Above 1979’s Sebastien Grainger) in Toronto. The album first started to come together in November 2006, when Metric went out to Bear Creek Studios, just North of Seattle, and began writing new material together. This was a first for the four-piece, which, in the past, relied on Haines and Shaw writing the songs and then presenting them to the rest of the band to add the final touches. Instead, the new album will be the result of a much more cohesive effort – all four band members, writing songs in one room together. Haines notes “our approach to composition has been very spontaneous.” Location has also been an important factor to the band. Haines recalls that “being isolated in the woods at Bear Creek helped to inspire the vibe for these first songs that we wrote together. We went for a warm sound, using a lot of vintage instruments.” In contrast, the batch of songs that the band is working on at Giant Studios has a completely different feel. Haines reflects, “We found that in the new sessions here in Toronto, the writing went in a much more electronic, beat-driven direction. One of the major changes was that [bassist Josh Winstead] started writing our basslines on the synth rather than the on the bass, which completely changed the tone of the new material.” In addition, Shaw and Winstead would switch instruments, with Shaw writing the basslines and Winstead writing the guitar parts. “The Giant sessions involved a lot of sonic experimentation,” Haines adds. Beginning in June, the band will finish writing, and begin recording, aiming to complete the project by October.

In addition to the work that the band is doing, frontwoman Emily Haines, along with her backup band, The Soft Skeleton (a collection of collaborators, including Scott Minor from Sparklehorse) is also focusing on the release of her EP. WHAT IS FREE TO A GOOD HOME? contains five previously unreleased songs from the KNIVES recording sessions, as well as a remix of KNIVES track “Mostly Waving” by Soft Skeleton member and noted arranger/composer Todor Kobakov. The title of the E.P is the name of a poem her father, poet Paul Haines, wrote for Robert Wyatt. The E.P also includes a setting of another Paul Haines poem, “Sprig”, which was produced by Dave Newfeld (Super Furry Animals, Broken Social Scene). Both poems are included in a book of Paul Haines’ work entitled SECRET CARNIVAL WORKERS which is being released in tandem with the E.P in July. Culled from reams of writings only fully examined after his death, this first volume brings together Paul Haines’s writing in all its complex and creative breadth.

KNIVES, which is nearing its June release date in the UK and Europe, reached the Top 10 at College Radio and the Top 10 in the AAA Radio charts. The album quickly became a favorite among critics, garnering features in the likes of Interview, URB, The San Francisco Bay Guardian, Performing Songwriter and Harp, among many others, gaining attention for its stripped-down sound and stirring vocals. Most notably, KNIVES marks a vast departure from the bold sounds and sassy persona that Haines is so associated with through Metric. The Fader wrote, “Knives is cinematic, with its ethereal piano lines and touches of strings and horns. Most impressive though is her voice, which is clean and full and breathy – it stands alone;” while Jon Pareles at the New York Times, reflected, “[Haines] trades Metric’s bravado for breathy, moody reflections on love and loneliness…she’s simply heartbreaking;” and Pitchfork Media called KNIVES, Haines’ most stirring vocal performances to date.”

Last Gang Records will release WHAT IS FREE TO A GOOD HOME July 24th on CD as well as on limited-edition vinyl. In addition, iTunes will premiere the record two weeks early, with an exclusive digital release on May 22nd.

Finally, on June 26th, Last Gang will release Metric’s first album, GROW UP AND BLOW AWAY. Originally recorded in 1999 and slated for release on Restless Records, GROW UP became victim to label restructuring and was shelved when Restless was bought by Rykodisc in 2001. Though the record, which features Haines and Shaw as a two-piece, was sold at early Metric shows – and became more widely available through online sharing – it has been a fan favorite for years. The record will be available as a digital release two weeks before it hits the stores, exclusively on iTunes, starting June 12th.

Throughout the Spring and Summer, Metric will play various North American shows, including a performance at Vancouver’s VFest in May, to preview and refine their new material. Fans can stay in the loop on all things Metric by going to www.ilovemetric.com