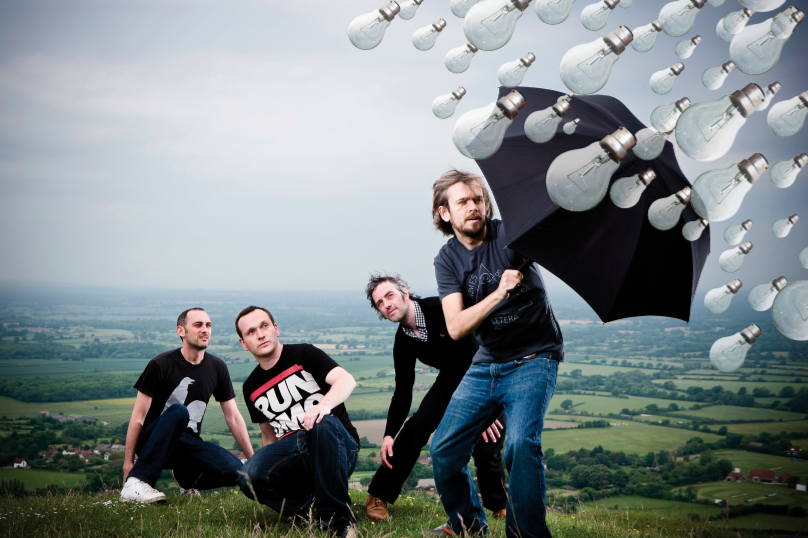 Imagine that Fujiya & Miyagi are mask-wearing technicians dissecting music, keen to magnify particles of sound to create a pulsing antidote to the ordinary. They speak in tongues, using language as a rhythm, picking words that sound good, rhyming ‘jigsaws’ with ‘carnivores’.

The Fall, The Human League and Momus rub up against each other…. at their indie-disco feyest Fujiya & Miyagi can elicit commparisons with Hot Chip, but Lightbulbs trips the dark fantastic in its own deadpan style

Their songs are incisive snapshots of real lives that make household appliances sound threatening. They are steeped in vintage music from evocative krautrock to deep soul, with wafts of early Human League synth, Floydian Englishness and the throbbing groove of Tom Tom Club, all filtered for modern times.

In total, Fujiya & Miyagi don’t really sound like anything. Instead, they sound like everything condensed into perfectly arranged three minute chunks of infectious pop music, a strange hybrid of James Brown on Valium and Wire gone pop. Or maybe Serge Gainsbourg with a PhD in electronics backed by David Byrne’s Eno-produced scratchy guitar mixed by MF Doom. It’s Darwinism gone mad.

Formed in 2000 as an electronic duo of David Best (guitars and vocals) and Steve Lewis (synths, beats, programming), they released Electro Karaoke In The Negative Style two years later, a minimal electronic set it hangs eerily on Best’s distinctive whispered vocal. Adding bass player Matt Hainsby in 2004, they released a series of ten inch EPs that took them to the hearts of fanzineland. Gathered together these parables of personal injury, both physical and mental, made up three quarters of the well-received (Pitchfork, NME, MOJO, etc) album Transparent Things in 2006. Named after a Nabokov brain dump on the relationship between the past and the present. It sums them up.

Their gentle Italo-disco funkis a particularly welcome development and osscillating organ is reminiscent of a pop-art Radiohead.. hard to resist

A 12-inch, Uh, further concentrated their sound. A set of vocal ticks, a funky bass and a storyline about a relationship as prickly as two porcupines, it made small talk sound sinister over an infectious groove. It was the perfect set up for their first album proper, Lightbulbs – imagine 11 classic ideas clicking on above your head, now with real drums in places, courtesy of Lee Adams, and the picture is complete.

Fujiya & Miyagi stay away from lyrical themes that have been done to death. Using old synths to punctuate their beautifully-observed anecdotes on romantic triumphs and disasters, heroes and villains and the world at large, their rhythms palpitate to produce modern symphonies like no-one else. Lightbulbs is a journey littered with fragmented images, anecdotes from the sublime to the ridiculous, blurry stories that you feel you shouldn’t have overheard. Each track an aural contamination set to itch your inner ear every waking moment.

F&M have added intriguing textures to the Krautrock of 2006’s “Transparent Things”: from the title track’s power-balladry to the subliminal menace of “Dishwasher”

“I’ll never be Big Maybelle,” says David Best of his unique singing style. True, but as a stylist fronting a band inspired by their evolution, plundering the past but set in the future, Fujiya & Miyagi’s Light Bulbs carves a niche of its own. This is truly contagious music, a completely unique take on modern pop music that’s completely their own.