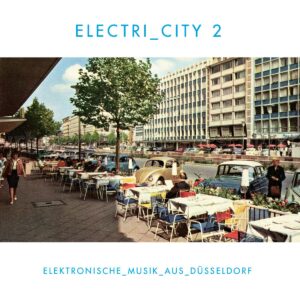 “La Düsseldorf”, of the legendary band from Düsseldorf, begins with a recording of cheering football fans, perhaps from the local stadium that is home to Fortuna Düsseldorf. The sampled fan choruses seem to echo the euphoric excitement with which listeners and critics well beyond Germany’s borders received the first Electri_city sampler. It is also advance praise of sorts – and absolutely justifiably: Electri_city II launches listeners on an intelligent and sophisticated roller coaster ride through one of the most integral chapters of recent German music history. Klaus Dinger and his seminal Neu! follow-up band La Düsseldorf then plunge into the distinct Motorik beat that would become the trademark of an eclectic genre – and we find ourselves smack in the middle of the musical innovations of the era. While the first compilation promoted the release of Rudie Esch’s book Electri_city – Elektronische_Musik_Aus_Düsseldorf, which sold out shortly after publication by Suhrkamp Verlag and has been reissued several times over, Electri_city II accompanies the release of the book in English translation. This development once again shows the great interest in the Düsseldorf sound of the 1970s and 1980s – and how the pioneers of that era created such a broad range of works that there is always something new to discover. Or, to quote La Düsseldorf: “Look / Go on, look!” (Guck mal / Guck doch mal!) – it’s worth it! Electri_city II can be viewed as the continuation in a series: the over hour-long compilation of well-known and entirely forgotten songs further highlights just how varied the sound born in Düsseldorf could be – and the hallmarks that unified it. New instruments – Minimoog, ARP Odyssey, Roland System 100, MC4, the legendary Korg MS-20 and the Roland TR- 808 – allowed the musicians to develop a completely novel hybrid musical style that fused punk and classical training as they moved between the Kunstakademie Düsseldorf, Ratinger Hof pub and the Studio für elektronische Musik in Cologne. The synthetic-organic electronic music scene was the meeting place of virtuosity and dilettantism; “Experiment!” was the mantra in the rehearsal rooms of the Rhein-Ruhr city. Sometimes, while listening, one gets the sense that the machines are experimenting with the people operating the buttons, keys and switches. Along with its historical contribution, this Grönland Records compilation also has significant value on the level of pure enjoyment: NEU!’s “Isi”, Rother’s “Karussell” and Wolfgang Riechmann’s dreamlike “Abendlicht” take the listener on a trip through the clouds, while DAF, Liaisons Dangereuses and Die Krupps dance around down below, stomping heavy boots on the dirty floors of the Düsseldorf underground. Electri_city II brings together the eccentric protagonists of an eventful period as it glides along on a panoramic tour through the electronic canon of North Rhine-Westphalia’s capital city; it also unearths long lost treasures: Teja Schmitz’s moans on the track “Studieren”, for example, are likely to be largely unknown to most listeners. This makes itall the nicer to again be able to hear the song by the regular hairstylist of the Düsseldorf electronic music scene. Teja’s straightforward work is, so to speak, synonymous with the time between 1970 and 1986; there is a clumsiness to it, the music machines clearly take on a life of their own, accompanied by the sounds of a person diligently working the controls. Listening to it is a musical adventure.

Listen here to a super nice radio special about the release 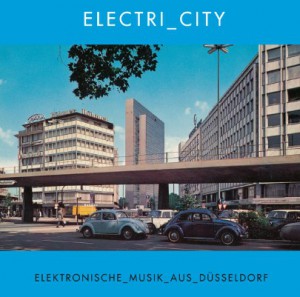 From 1969 to 1986 the handmade analog electronic music of Germany was mainly produced in Düsseldorf. This was before MIDI and computers, before samplers and other digital devices. This was the analog revolution, a handmade futuristic music with synthesizers.

THE * CITY
Düsseldorf is the advanced hometown of most German electronic bands. The capital of North Rhine-Westphalia became the capital of an analog electronic movement from the early ’70s to the mid-‘80s. Electronic musicians were great individualists, maybe they would not even call themselves a ,scene‘ ; but for some reason they all converged on Düsseldorf. Aware or unconscious, these People explored new ways of making music; they searched for an alternative, most cathartic way to deal with Germany’s unfortunate past and the mighty cultural influences of the so-called ,Siegermächte‘, like Rock‘n‘Roll or Beatmusic.  From 1969 to 1986 the handmade analog electronic music of Germany was mainly produced in Düsseldorf. This was before MIDI and computers, before samplers and other digital devices. This was the analog revolution, a handmade futuristic music with synthesizers.

THE * BANDS
This is the sonic account of the city’s most relevant output of bands like NEU!, DAF, La Düsseldorf, Rheingold, Der Plan, Die Krupps and many more. Influence and atmosphere of the famous Düsseldorf Art Academy is partly providing profound background for many of these bands. Most of the protagonists had an understanding of themselves as generally working in arts first, and thus became musicians. Electronic music evolved from then popular Prog-Rock (Progressive Music Movement) and became a worldwide genre of it‘s own.

What initial ingredients provided the city of Düsseldorf inhere for the music? Is the geographical space the lowest common denominator of the growing scene, or the appreciation of a ‘right time, right place’- thinking?