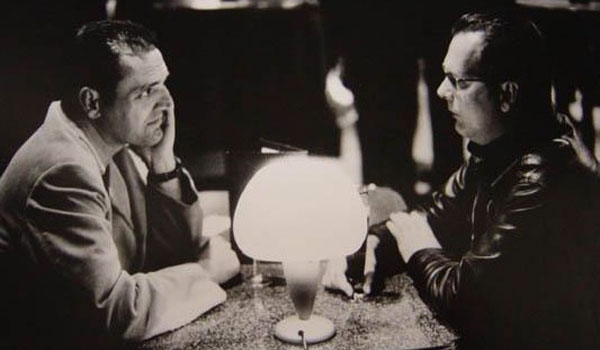 In ‘Strobl’ Bombay1 have returned with something completely unexpected. From the Hinterlands of obscure German electronica arrives a beautifully realised album that has more in common with Kings Of Convenience than Kraftwerk. For their second album, gone are the electronic soundscapes, techno anger and glacial atmospherics of ‘Me Like You’ (2003). It’s time for soul-bearing, raw heartfelt songwriting and a quantum leap forward in terms of musical empathy.

But first some history.

Bombay1 are old friends Kurt Dahlke and Stoya, both from Kraftwerk’s home town of Dusseldorf. Dahlke prefers to be known as Pyrolator (“Because he likes to set things on fire,” explains his musical partner, deadpan) and has an impeccable background in German alternative music. A founding member of D.A.F., the original electro-punk band who laid a blueprint later followed by everyone from Skinny Puppy to Nine Inch Nails, he left after one album and formed Der Plan.

…the imagery and other worldliness of Syd Barret as interpreted by a glimlet- eyed Trent Reznor.

Because their lyrics are in German, Der Plan aren’t much known outside their own country but at home their amalgamation of Residents-style surrealism and Visage-esque electro-pop garnered a strong following throughout the 1980s. Since then Dahlke has been running the futuristic Ata Tak label (home to Oval and Holger Hiller, amongst others) as well as producing the next wave of post-rock electronic acts such as To Rococo Rot and Kreidler. Dahlke is the man who manipulates the machines in Bombay1.

So what of Stoya? Stoya is the voice, the wordsmith, and known only by his single name. In his time he’s been a record shop owner, a Brixton squatter, a musical collaborator with Gang Of Four’s Andy Gill, a DJ at Germany’s most famous punk club, a member of the band Trash Museum whose ‘I’d Rather Die Young Than Grow Old Without You’ was a John Peel favourite, and he’s currently a successful painter (one of whose exhibitions was named after the King Tubby album ‘Dub Like Dirt’).

So how do they end up with an album that sounds variously like Syd Barrett, Bright Eyes, Nick Drake, Love & Rockets, Snow Patrol, Julian Cope, Leonard Cohen and even the Pet Shop Boys? An album comparable in quality, even, to some of the above.

“We went to a house for a month in a little village called Strobl, hence the title,” Stoya explains, “It was by a lake in the mountains in Austria. It had a grand piano so we took a microphone, a computer and a sampler and composed. We brought back what we had created and changed the samples for real sounds – a string orchestra, guitar, bass, horn-player. Then we went to London’s Mayfair Studios to mix the album with Alex Silva who has also worked with the Manic Street Preachers.”

So those are the bald facts but they still don’t explain how a gnarly electronic agit-prop duo can reappear with an album that opens on sparse piano’n’cello-accompanied heartbreakers about relationship disintegration.

“In the countryside,” ventures Stoya reticently, “I was much more comfortable putting out lyrics that are personal. Over four weeks the birds, the wind, the rain led to a much more directional songwriting. I wanted this album to sound as natural as possible without any gimmicks, nothing – just plain.”

The truth was that Stoya’s longterm romantic relationship, a relationship with two children, had faltered and nearly broken. The album starts from this premise and is permeated by “the fight for love to come back, to get my loved ones back.” It is the songwriting of a man who has nearly lost everything, a man who has peered into the abyss of loneliness and cannot live with what he sees there. And all in his second language!

“To me it’s easier to write personal lyrics in a foreign language,” Stoya admits, “I can step outside myself and take a look at what’s happening. It’s not my mother language, it’s my writing language.”

Although things start out bleak, however, ‘Strobl’ is all about coming back, about returning to joy, and by the time the listener reaches the Lee Hazelwood growl and jaunty strum of ‘Brand New Day’ things are surely on the up.

“We recorded that the morning after we’d had a late night session in Strobl,” laughs Stoya, “‘Quick, Quick,’ I said, ‘I have to sing now because by lunchtime my voice will be back to normal.’ On that song it’s my hangover voice.”

By the time the song ‘Lost Souls’ bursts into life, Stoya’s children are even featured as backing singers. Many albums claim to be journeys but, while not all specifically about Stoya’s life, ‘Strobl’ really does travel (via some completely unrelated and entertaining stopping points), from stark separation to opulent elated love songs. It’s not heavy, it’s not gloomy, it’s just life and a sprightly forty minute album to revel in from beginning to end.

So finally, why the curious name Bombay1?

“There are places in this world you’ve never been,” says Stoya, “places you’ll probably never go. To us Bombay, like Beijing, is such a place. You have an idea, an exotic idea what those places are like, a dream reality to reach for. We want Bombay1 to be like that…”

A dream reality to reach for? Are you ready..

Hazy Soundscapes, industrial dope beats, neopsychodelia, noise pop or trip hop? Every category and no category suits this music of Bombay One. But one thing is for sure, ‘this record rocks’.

a concept which is comparable to Pink Floyds ‘The Wall’.