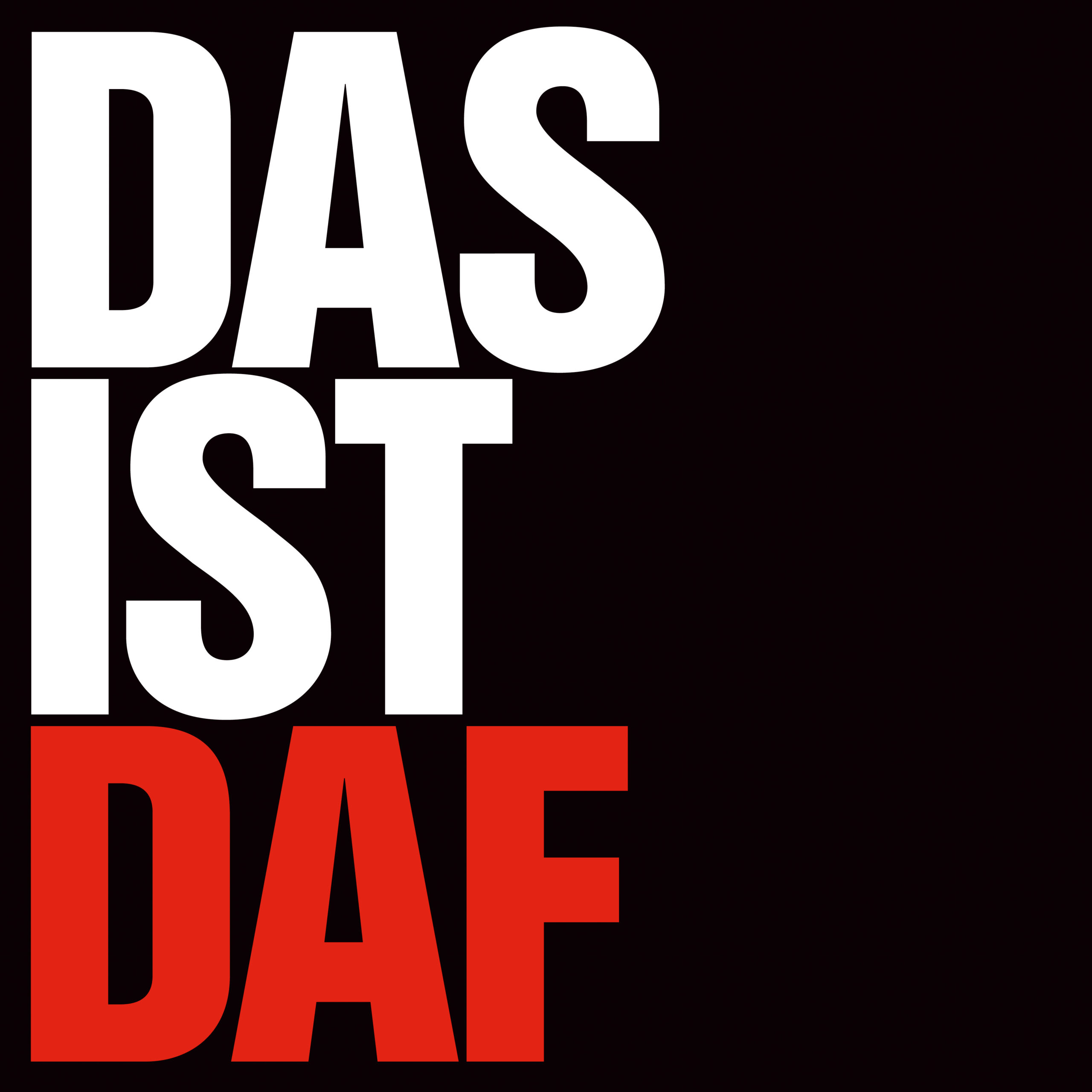 The Vinyl Box, CD Box and the Remixes are completely sold out over our webshop.

DAF have released an extensive Vinyl box with the title „DAS IST DAF“, 29th of September.
This box features the first four original DAF vinyls,
a remix vinyl called „Reworks“, a 7“ with brand new DAF tracks, a slipmat, an original autograph card, a 36-page booklet (with previously unseen pictures by Anton Corbijn and Sheila Rock among others) and a download code.

Many things have been said about this band: they were called the “godfathers of techno,” the pioneers of EBM and the forefathers of electropunk. Yet they only laugh coolly and remain tight-lipped in the face of any attempt to historicize them. Deutsch Amerikanische Freundschaft – better known as DAF – is a myth.

What we know is that they released four albums in a short time span between 1980 and 1982, and that those albums changed the history of music worldwide. Yet DAF’s international renown certainly was not based in the name: Gabi Delgado-López and Robert Görl were never looking for friendship; their expressions were invariably ones of steely, piercing stares, and they presented themselves with a precisely staged iciness that belied the ardor burning inside them.

DAF initially formed as a quintet in the confines of Ratinger Hof in Düsseldorf, alongside bands like Fehlfarben, Der Plan, Mittagspause and others, but later adopted a conceptual approach that left no space for other “young lords.” From that point on they worked as a duo. With precision percussive elements mastered in classical jazz training, a legendary Korg MS-20 and a highly fetishistic militaristic spoken-word style, they produced four albums in quick succession – records that could be construed as substitutes for sex, drugs and violence. While the first album, Die kleinen und die Bösen – on which half the tracks were recorded in Conny Plank’s studio while the B-side contained live recordings – still hinted at roots in original punk music, they then created a triptych of leathery, sweat-soaked hedonism on Alles ist Gut, Gold und Liebe and Für immer. In the early 1980s the records in the DAF box set Groenland Records is now releasing quickly made this duo the international figurehead of the music everyone now associates with the Rhine region: DAF, along with Kraftwerk and Can, were the pioneers of German electronic music. They were always in vogue. Sequencers, synthesizers, commanding drum beats and the most cutting staccato spoken-word vocals – an alliteration only disrupted by the notion of the uniform. Very few bands have managed to contrive their own look in such masterly fashion, and to even make it a subject of their work: “Was ziehst du an heut nacht?,” “Verehrt euren Haarschnitt” and – oh yes – “Tanz den Mussolini.”

DAF’s militaristic aspect is only broken by their attitude of denial, which invites us to dance in the dark with them and to follow Delgado-López’s rhythmic movements – even if he seems to be dancing entirely for himself. Perhaps it is that contradiction itself that renders this duo so eternal.

This compilation will allow you to experience the music of DAF; the darkest and hardest driving musical imperative ever to come out of Germany.